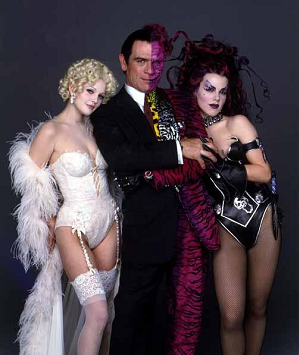 "You know, I always loved how in the '60s Batman TV series, supervillainy was like the new rock and roll. Every supervillain had at least one hottie in their lair, as well as generic goons with their nicknames tagged on their sweaters. Where do supervillains go to get groupie chicks? Is there a bar somewhere?"
— The Agony Booth on Batman Forever
Advertisement:

Every sufficiently decadent Casanova, criminal and villain will have at least one scantily clad floozy to serve as eye candy, fetch drinks, and slink around seductively. If the villain is sufficiently well-funded, they may have an entire harem. This applies to female villains too, with bare chested male mooks at her beck and call.

The "sultan" in this harem also has a habit of dressing the floozies in a thematically appropriate manner that coincides with their job or even criminal theme. Not surprisingly, their employer doesn't have any real affection or attachment to the harem, and will disrespect or mistreat them; sometimes dumping them on the ground when hearing bad news, ordering the floozy out when he talks shop, or outright using them as human shields/distractions in a firefight.

And of course, the paid for harem will have only nominal loyalty to their "sultan", being either extremely frisky with the hero or disappearing at the drop of a hat. It's a rare floozy that "stands by her man." The exception is if their employer specifically hires opposite gender bodyguards or domestic servants who just happen to be gorgeous and has them pose as eye candy.

Might be found in the Den of Iniquity during off-duty hours. Compare Ignored Enamored Underling and Paid-for Family. Also compare Royal Harem, where the relationship is more institutional than paid. See also I Have You Now, My Pretty and Go-Go Enslavement, where the villain tries to press a heroic lady into the harem. A Gold Digger on the other hand may see this as a viable lifestyle choice, making the villain a Sugar Daddy.

Truth in Television, this is probably a Real Life trope that has been stylized in TV.