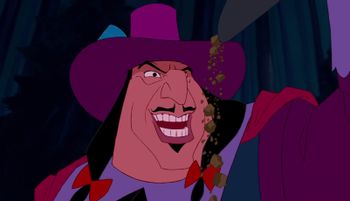 In a story where the plucky heroes are fighting against The Empire, or some other oppressive government, one of the main villains will hold the title of Governor, or whatever the story's universe calls such a rank. The governor is usually a Lawful Evil type, although more sympathetic views can put them into a Lawful Neutral type.

Sometimes though, the governor could live in a state that has a republican/democratic form of government, but they have ambitions that will put them at odds to the promised freedoms to the populace. Usually stopping their devious plans is the driving force of the plot.

May alternatively be called a magistrate, viceroy, or sheriff (see folklore).

Overlaps with Corrupt Politician, and an antagonistic governor can take a step above to become an President Evil, The Emperor, or Evil Overlord. Distinguished from a Feudal Overlord by being appointed or elected to their post rather than inheriting it, but imperial governors frequently hold aristocratic titles as well. Compare with Mayor Pain, which is this trope, but applied to a mayor.