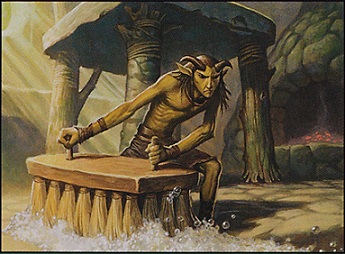 The hardest lesson for any elf to learn is humility. It takes a giant to teach that.
"Such a proud race, reduced to servitude. Sometimes even Gods have a sense of humour."
— Gnarl (passing comment on the elves being enslaved by the dwarves), Overlord I
Advertisement:

A once-proud and glorious race has fallen. Now, they live in squalor and slavery with few traces of their ancient culture remaining. The only ones that escaped this fate did so by dying or being killed. Perhaps they will rediscover their old pride and power, for better or for worse...

This trope only applies if there's some proof that the race used to be a proud and noble one, before their 'fall'. If a universe's elves (though not always elves, most are however) have always been nomadic tribes of pointy-eared barbarian bowmen, it doesn't count for this trope, no matter how badly they're oppressed and see the violence Inherent in the System.

A subtrope of Screw You, Elves! and could be considered meta-revenge against Can't Argue with Elves. It can overlap with Slave Race.