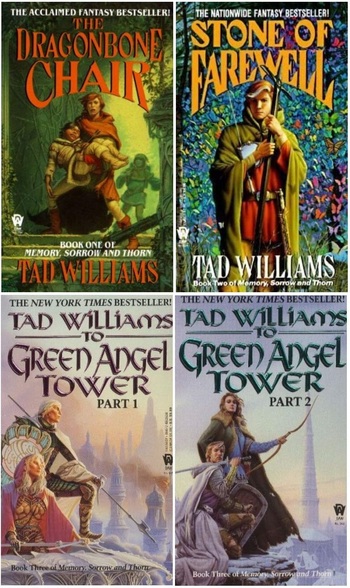 When frost doth grow on Claves' bell
And shadows walk upon the road
When water blackens in the well
Three Swords must come again.

When Bukken from the earth do creep
And Hunën from the heights descend
When Nightmare throttles peaceful sleep
Three Swords must come again.

To turn the stride of treading Fate
To clear the fogging Mists of Time
If Early shall resist too Late
Three Swords must come again.
— Nisses, Du Svardenvyrd
Advertisement:

Memory, Sorrow, and Thorn is a High Fantasy trilogynote or quartet; see note on To Green Angel Tower written by Tad Williams.

The story is set on the mythical continent of Osten Ard, a fairly Standard Fantasy Setting in which humans are the dominant race after centuries of struggle against the elf-like Sithi, troll/dwarf/Inuit crossover Qanuc, and various other creatures. Beneath the surface, however, ancient magics are stirring as the undead Storm King nears the culmination of a 500-year long plan to return to power. The key to defeating the Storm King's plan involves three magical swords (the titular Memory, Sorrow and Thorn), which must be found and brought together if his threat is to be averted... or so it appears.

The plot mainly follows young Seoman (Simon), an orphan and kitchen boy in the Hayholt, capital of Erkynland, who mopes around, avoids chores, and dreams of a heroic life. Of course, The Call Knows Where You Live, and he is rapidly embroiled in The Hero's Journey, which he finds out the hard way isn't as glamorous as the stories. Along the way, he befriends members of various races, rescues a Rebellious Princess, slays (pretty much) a dragon, searches for the three swords, fights in battles, is knighted, and finally embarks on a journey back to the Hayholt in a desperate bid to disrupt the Storm King's plan.

There is also a rather spectacularly large number of secondary characters and plot lines, which are responsible for the size of the books. On the Sliding Scale of Idealism vs. Cynicism, the story falls somewhere in the middle: Anyone Can Die, characters get Killed Off for Real with depressing regularity, and the main characters seem to be the focus of all the suffering that the author can imagine throwing at them. Yet what slim hope there is of victory may owe more to The Power of Love than strength of arms.

In 2014, more than 20 years after finishing the trilogy, Williams announced

that a Sequel Series is forthcoming. This new trilogy is collectively called The Last King of Osten Ard, and its first book was published in June 2017. An interquel novel, The Heart of What Was Lost, was released shortly before that. The prequel novel Brothers of the Wind, set long before the start of The Dragonbone Chair, was released in November 2021.

Memory, Sorrow, and Thorn consists of:

The Last King of Osten Ard consists of:

The character sheet for both series is here.