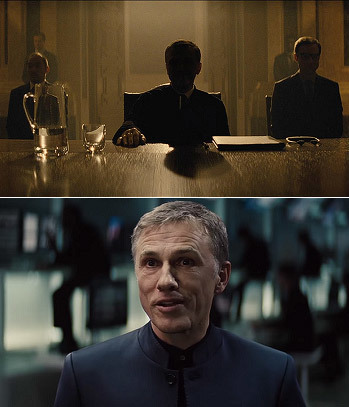 "It was me, James. The author of all your pain."
"At last, the masks had fallen away. The strings of the puppets had become visible, and the hands of the prime mover exposed."
— Legacy of Kain
Advertisement:

A situation where a Story Arc contains a Big Bad whose identity is not known until much later. This could be a result of the heroes going against The Faceless, requiring only a look under the mask to understand everything. In most cases, this is an inversion of the Hidden Agenda Villain, where we know that something bad is happening and the Driving Question is the one behind it all.

Usually a Magnificent Bastard post reveal. Compare The Man Behind the Man, except without the first man, and The Man in Front of the Man, who is Hidden in Plain Sight. It can only overlap if the first man is obviously a Disc-One Final Boss.

If the Hidden Villain turns out to be a previously known antagonist, see Hijacked by Ganon. If it was someone who was never suspected at all, then The Dog Was the Mastermind. Not to be confused with Evil All Along, where a seemingly good character turns out to be evil.

The Reveal may involve a dramatic Emerging from the Shadows.