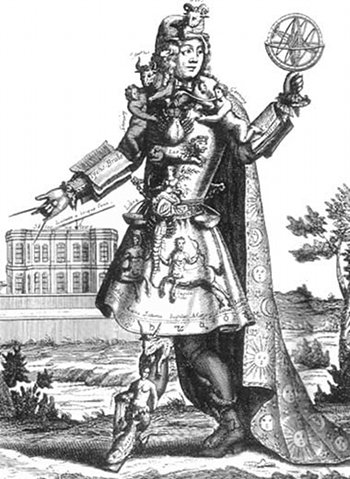 "The stars foretell... a change in wardrobe?" note Habit d'Astrologue by Nicolas de Larmessin.
"Astrologer extraordinary. Seer to princes and emperors. The future foretold, the past explained, the present... apologized for."
— Organon, introducing himself to The Doctor ("The Creature from the Pit")
Advertisement:

This character is a pretty old staple in fiction. This characters claims to have the skill to see past, present and future events based on the position of stars and planets, often using big heaps of Symbolism to link characters and events with astrological bodies and movements. They're a type of Fortune Teller that uses telescopes, star charts and zodiacs rather than a Crystal Ball or Tarot cards. Typically they're a Phony Psychic in modern non-fantasy stories; the astrologer is usually a fake, whether they will admit it or not, and whether they sincerely believe in their own powers or not. If they can actually divine the future through some form of Ritual Magic or Psychic Powers they're effectively Seers, and they may Invoke the Phony Psychic trope as a cover for their real psychic powers.

Astrologers can be good guys, neutral, self-interested or evil. In fact, a story may have two Astrologers who engage in Scry vs. Scry to see which can affect their vision of the future. Just like a Tarot-based divination is open to interpretation, the Astrologer may anger clients when they wrong interpret predictions or have unfavorable fortunes. This especially true when they serve a villain who may kill them for the failure or as bearer of bad news.

The astrologer may use the Western Zodiac or the Eastern Zodiac, or instead substitute a wholly new astrological system of meaning. This last one is especially common in fully original fantasy settings. If they do use a zodiac of some sort, they may also happily engage in matchmaking, whether they're asked to or not.

The Astrologer is not to be confused with an Astronomer; the latter studies the stars and the former attempts to use them to explain things on earth.

Compare to Heaven Above, which describes the connection between the divine and any celestial body that flies across the sky, though originally there was no difference.