Recap / Doctor Who S14 E1 "The Masque of Mandragora" 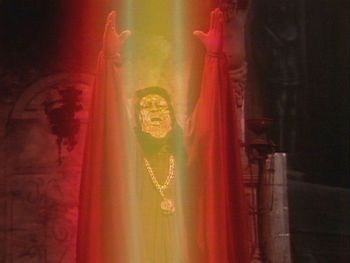 TOUCHDOOOOOOOOOWN!
The Doctor: Humans have got such limited little minds. I don't know why I like you so much.
Sarah Jane Smith: Because you have such good taste.
The Doctor: That's true. That's very true.
Advertisement:

The one with the evil spotlight... in the Village!

The Doctor is giving Sarah Jane a tour of the TARDIS and they come across a fabulously wonderful new console room, in which they decide to stay in. The TARDIS then pitches up in Renaissance Italy (well alright, in Portmeirion), having had an encounter en route with a fizzy ball of energy that the Doctor calls the Mandragora Helix. He hasn't realised that he's brought it with him (since he rather stupidly left the door open), and when it escapes from the TARDIS and begins taking over or killing the locals, he follows.

The energy finds an underground temple and takes over the Cult of Demnos, which is led by court astrologer Hieronymous. It instructs them to prepare the way for Mandragora's full appearance. However, the astrologer himself is a pawn in political intrigues between Count Federico and his nephew, Duke Giuliano. Giuliano has just acceded to the Duchy of San Martino (after the last Duke rather mysteriously came down with a case of death) and a grand Masque will be held in honour. Giuliano and his companion Marco hope to prove that Hieronymous is a charlatan. Meanwhile, the Doctor is sidetracked by almost being executed and steals a few horses, and Sarah Jane is kidnapped and hypnotized by the cult.

During the dance, the Cult of Demnos attack the court and kill many, while Hieronymous — now unified with the Mandragora Helix — confronts the Doctor in the underground temple. Attempting to blast the Doctor with pure Mandragora energy, he is foiled when the Doctor reveals he has earthed both himself (with some iron armor) and the altar: the energy is drained off and the Earth is safe.

Also, Sarah becomes the first companion to question how come she can understand and be understood when the locals must all be speaking Italian. The Doctor says it's a "Time Lord gift", and it's later explained that it's done telepathically via the TARDIS.