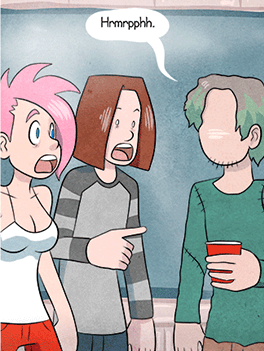 "Do I have something on my face?"
Honestly i kind of just want to see his skull like is it, solid where there would be eyes and a nose.
— gameranx
Advertisement:

The human brain is hardwired to recognize faces. Humans will even see faces where there are none, such as The Man in the Moon. So there is something very disturbing about a person without a face. Meet The Blank.

The Blank is a humanoid character with no face. Perhaps it is a disguise to unsettle opponents. Perhaps they were a victim of some entity that steals faces, a common form of Transformation Trauma. Or perhaps they're just that good at poker. How the character is able to see, breathe and talk without eyes, a nose or a mouth is not likely to be resolved.

While The Noseless or No Mouth characters often have part-time facial features with Sudden Anatomy, this seems to happen less often with The Blank. Presumably, The Blank is generally done for dramatic impact, while those others are sometimes simply for creator convenience.

Not to be confused with The Faceless, which is where a character's face is hidden from view rather than nonexistent. Compare Faceless Eye and Eyeless Face. The Nondescript might as well not have a face, given how tough theirs is to recall. See also Malevolent Masked Men and its extra-blank subtrope White Mask of Doom.

Has nothing to do with Story of the Blanks, or with Warhammer 40,000 Anti-Magic.

They have no facial features at all.

They have no facial features at all.