Literature / Till We Have Faces 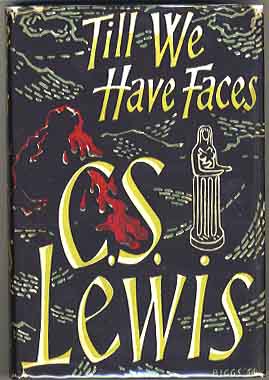 "I saw well why the gods do not speak to us openly, nor let us answer. Till that word can be dug out of us, why should they hear the babble that we think we mean? How can they meet us face to face till we have faces?"
"Are the gods not just?"
"Oh no, child. What would become of us if they were?"
Advertisement:

Till We Have Faces: A Myth Retold (1956) is C. S. Lewis's last novel, and the one he considered his best and most mature. It relates the myth of Cupid And Psyche (found in Apuleius' Latin novel The Golden Ass) from a very different perspective than the original.

It is presented as the record — and the formal complaint against the gods — of Orual, daughter of the King of Glome, a pagan kingdom to the north of ancient Greece. Her father, hot-tempered and prone to violence, has little love for his three daughters, least of all for ugly Orual. Her only friends in the palace are her beautiful half-sister Istra and her tutor, a Greek slave who she only knows as "the Fox".

Her happiness, such as it is, ends abruptly: after the people of Glome begin worshiping Istra's beauty, Glome is stricken by famine and plague. The high priest of the goddess Ungit declares that these calamities are divine punishment for blasphemy, and that they will end when Istra is sacrificed to Ungit's son, the god of the mountain, the Shadowbrute. The King agrees, over Orual and the Fox's objections (Istra herself is at peace with this decision). Orual falls sick from despair on the night of the sacrifice, so she is unconscious while Istra is chained to a tree at the edge of the god's country and left for the Shadowbrute.

As soon as she is back on her feet, Orual steals away with the soldier Bardia to give her sister a proper burial. Instead, they find Istra herself, alive and well in the valley of the gods. Orual's joy turns to consternation, however, when Istra seems to have gone mad, believing that she is the bride of a god and that her forest home is actually a divine palace. Orual takes steps to disabuse her sister of her illusions; these end in a disaster that permanently separates the two sisters.

Distraught, Orual returns to Glome, where she begins wearing a mask-like veil. She then takes the throne when her father falls ill, and with help from the Fox and Bardia, she rules Glome shrewdly for many years.

One day, by chance, Orual hears a myth from a priest in a foreign land; to her surprise, it is her and Istra's story. But the priest's version gets many details wrong; in fact, it makes Orual out to be the villain of the story. Angered, Orual decides to set the record straight: to tell her story, and to make it her accusation against the gods. However, in the process of writing her story down, she is confronted with divine visions and hidden truths about herself, and ultimately she is forced to reinterpret everything she knew.

Till We Have Faces includes the following tropes: