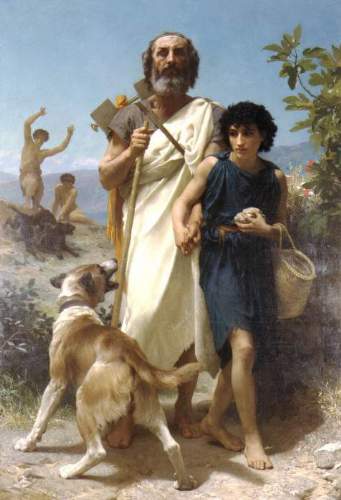 Homer and His Guide, by William-Adolphe Bouguereau
Sing, O goddess, of the rage of Achilles, son of Peleus, that brought countless ills upon the Achaeans. Many a brave soul it sent hurrying to Hades; many a hero did it leave prey to dogs and vultures ...
Advertisement:

So begins The Iliad, the oldest tale in Western literature, attributed to Homer.

The Iliad starts in the ninth year of The Trojan War, when a quarrel among the Greek leaders ends with Achilles sulking in his tent. His best friend (and in some versions, cousin), Patroclus, dresses in his armour, and goes out to fight in his place, but is killed by Hector. Furious, Achilles charges into battle, kills Hector and desecrates his corpse, then stages an elaborate funeral for Patroclus, which ends with a sports contest. The epic ends with King Priam visiting Achilles in his tent to ask for the return of Hector's body to give his son proper funeral rites. Moved, Achilles apologizes to Priam and complies to the old king's request.

Along the way, there are many epic fights, and flashbacks to the causes of the war.

Advertisement:
Sing to me of the man, Muse, the man of twists and turns driven time and time and again off course, once he had plundered the hallowed heights of Troy...

The Odyssey, a sequel of sorts to The Iliad, also begins at the end of the story. It tells the story of Telemachus, Odysseus' son, manning up and taking his home back from the 108 suitors who were attempting to seduce his mother, and Odysseus'...odyssey back home from the Trojan war. Odysseus' story is told in flashback, and is long. He pretty much flitted around a whole bunch of islands, had sex, blinded Poseidon's son, had sex, chilled with Circe, had sex, went to Hades, chilled with Calypso, had sex, and cried on a rock. Telemachus meets up with Odysseus, and the two of them massacre the suitors and the story ends with a lovely gift of aid from Athena.

The ancient Greeks held Homer in something like reverence, viewing his works as the foundation of their society, in much the same way as modern Europeans view the Bible, and although they were not seen as religious texts one could be forgiven for getting that impression. And some hero-cults appeared in Hellenistic Greece where Homer was elevated to divine status, or at least in the presence of the gods.

The traditional view of the author himself was that he was most certainly illiterate, and probably blind as well, which may explain why peoples' livers fall out while blood stains their chests, how people break swords in two over the heads of others, and how they slice off limbs and heads (and sometimes, heads in two) with the ease of a lightsaber. Tradition also holds that Homer memorized both The Iliad and The Odyssey, and probably changed the story each time he told it. Given the sentence "Homer was a blind, illiterate man," you can find historians who would dispute almost every word of it (with the possible exception of "was" note Though there isn't actually consensus that Homer existed at all.). Yes, some historians believe that both The Iliad and The Odyssey were written either by a woman or a Jewish man. This is leaving aside however many different people may have passed on the stories until they reached the forms in which they're currently published.

The continuing questions over his identity have led to the famous joke (also used with Shakespeare) the Iliad and the Odyssey were written "not by Homer, but by another man of the same name."

And no, not that Homer. Although Jeopardy! once had a category where that Homer read quotations from this Homer's works. And there is an episode of that series where that Homer makes the same confusion, and they give a version of The Odyssey with that Homer as Odysseus. For additional meta, Homer's actor voiced the original Homer in Hercules: The Animated Series.