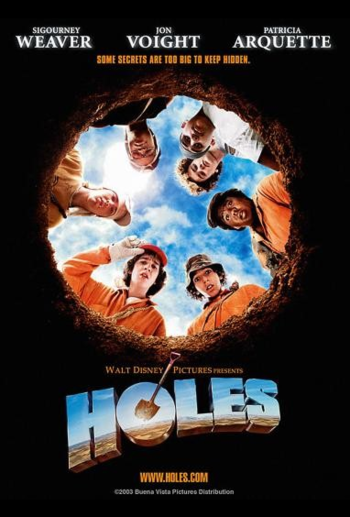 Can you dig it?
"With broken hands and withered souls,
Emancipated from all you know,
You got to go and dig those holes…"
Advertisement:

Holes is an extremely well-regarded Newbery Medal-winning children's novel by Louis Sachar. It's about teenager Stanley Yelnats IV, who is arrested for a crime he didn't commit and sent to a juvenile detention center called "Camp Green Lake". At the camp, the boys are mistreated by the suspicious owners, who force them to continually dig holes in the middle of a desert with the same width and depth. And there are curses. And thumbs. And a story from the past about a romance destroyed by bigotry.

Not so depressing or angsty as the premise makes it seem, but still a bit "adult" for a kids' book, hence its success. The narrative includes two other timelines in addition to Stanley's that appear to be almost irrelevant to each other, until the resolution when they all come together.

In 2003, it was made into a fairly faithful film by Walt Disney Pictures; the script was also written by Sachar. It was directed by Andrew Davis (of The Fugitive fame) and stars Shia LaBeouf as Stanley, Sigourney Weaver as the Warden, Jon Voight as Mr. Sir and a good deal of other notable actors in bit parts. Like the book, the film is well-regarded among both fans of Sachar's work and the broader public, to the point where it still maintains a reputation as one of the best literary adaptations of the modern era.

Sachar wrote a sequel called Small Steps which follows Theodore ("Armpit") and X-Ray after their release from Camp Green Lake.

He also wrote a guide to surviving Camp Green Lake, narrated by Stanley.

Sometime during the past 3 generations, it changed a little, and in the version Stanley III sang to Stanley IV, the second line went
"The bark on the tree was just a little bit softer."
The Zeronis, meanwhile, translated it differently, rendering it
If only, if only, the moon speaks no reply;
Reflecting the sun and all that's gone by.
Be strong my weary wolf, turn around boldly.
Fly high, my baby bird,
My angel, my only.