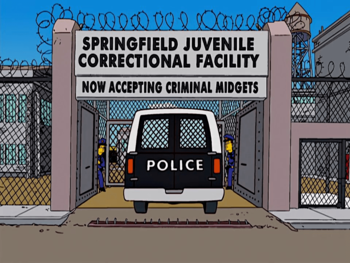 These kids (and midgets) will never make it on the outside.
In Real Life, juvenile detention centers, also known as juvenile hall or "juvy", are where minors are sentenced to serve criminal sentences, or for defying a court order. While they certainly are not pleasant experiences, the children are not meant to be strictly punished or to be cut off from society. The detention centers are ordered by law to provide counseling, full education, and healthcare to all detainees.
Advertisement:

Not so in fiction. In fiction, juvenile hall is portrayed as something more akin to The Shawshank Redemption, with individual cells (almost all juvenile detention centers are minimum security), exercise yards, fences and/or high cement walls with barbed wire, social hierarchies and dominance, fiat money trading, and "long-timers" and "lifers". It is basically a children's version of the Prison Episode. It usually happens when the young protagonist (or side character) is sent to jail for a non-heinous crime (a prank, or a minor offense), and the episode is about how out of place they are. Compare Detention Episode.

However, this trope is usually seen as a parody; it is very rare this trope is played straight, because that would be far too depressing, and any show portraying it seriously would likely want to portray it realistically.

There is a grain of Truth in Television. There are juvenile detention centers for minors who have committed heinous crimes, such as rape, homicide, and armed robbery. However, these are deemed separate from the most common ones, and under almost all occasions, the character in question has not committed a crime like that. And even those still provide for basic needs of children. If the child's sentence extends into adulthood, the detainee is transferred to a regular prison.

Compare Department of Child Disservices. See also Orphanage of Fear, which is pretty similar in how it plays out. For adult prisons that deal out unnecessarily harsh punishments, see the Hellhole Prison.