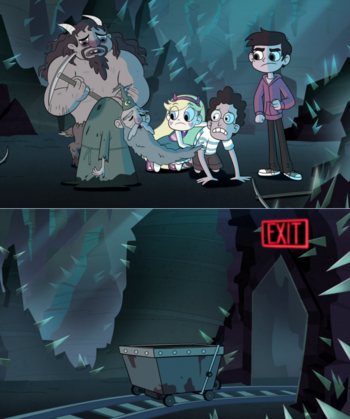 "There's no way out. Not that I've seen." "What about that mine cart?"
"There has not been an incident here in fifty years, and the day you show up, this happens!"
— Warden Dimitri Johannes Petrov to Henry Stickmin's Prison Riot, Henry Stickmin Series
Advertisement:

Alice gets unfairly sentenced to a lifetime in prison or some equally bleak fate. In this prison are others who have been trapped there for years, decades, or even centuries. In all those years they never found a way to escape, and they tell her that it's impossible. But Alice being the protagonist and all, she'll inevitably find a way to escape. And she'll do it within minutes. Something others have attempted and failed at for centuries, and Alice can do it in under 22 minutes. Because she's The Hero, that's why.

If the main character is trapped somewhere said to be "inescapable," they are, invariably, going to be able to find a way to escape. This will frequently be achieved so easily you'll be left to marvel at how no one was able to think of it before.

Usually attributed to Status Quo Is God, and because spending an entire season sitting around in prison can get a bit boring for the viewer. Usually justified if the escape is aided by allies from outside the prison.

Bonus points if it's a Kid Hero.

This trope only applies if the escape is done very easily and/or quickly AND if the prison is designed to be impervious to breaching. If the prison break takes a ton of planning and is as difficult as it realistically should be, then that's a Great Escape. If the prison is easy to escape from, but isn't necessarily played up as inescapable, then it's just a Cardboard Prison.