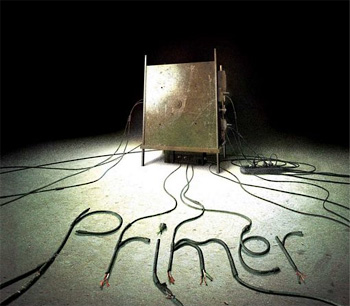 What if it actually works?
"Look, everything we're putting into that box becomes ungrounded, and I don't mean grounded like to the earth, I mean, not tethered. I mean, we're blocking whatever keeps it moving forward, and so they flip-flop."
— Abe
Advertisement:

Primer is a 2004 independent science fiction drama film famous for a number of things:

The film opens with two engineers and entrepreneurs, Abe (David Sullivan) and Aaron (Carruth), building tech projects in Aaron's garage. After achieving some success with their latest project — a room temperature superconductor — they discover it has an unexpected side-effect: creating time loops. Everything they place inside the Box exhibits temporal anomalies, proceeding normally then go backwards for a continuously repeating sequence, so that whatever is inside the Box can leave in the present, or at any point in the past.

By scaling up the Box, they're able to use it as a means to travel into the past. The device has its limitations:

Even with the limitations, however, they figure out how to use time travel to make a nice profit, through effectively living through the same period a second time with foreknowledge of the stock market.

Then something goes wrong. And that's when things get really confusing.

The plot itself is non-linear, and most of it — including several crucial events — is neither shown nor described, just implied.

Yes, this is a movie that requires graphs to get a handle on.

Shane Carruth later went on to direct (and write, produce, star in, etc.) Upstream Color. He also starred in and was one of the producers for The Dead Center.