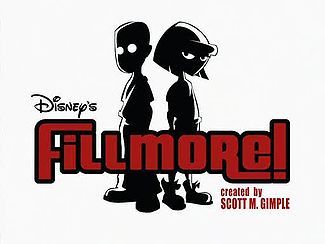 Fillmore! is an animated television series, that ran from September 2002 to January 2004 for a total of 26 episodes. An animated homage to 1970s Cop Shows, produced by Disney for ABC Kids and then briefly shown in reruns on Toon Disney, this show features Safety Patrol officers Cornelius Fillmore and Ingrid Third cracking cases around middle school. Many episodes also parody various films and television series including The Silence of the Lambs.

The show was cancelled before its time, for one of the very reasons that made it so good: the entire premise rests on smartly parodying a genre that children wouldn't be familiar with. Like Freakazoid! before it, the watching demographics skewed older than desired, and the rest is history.