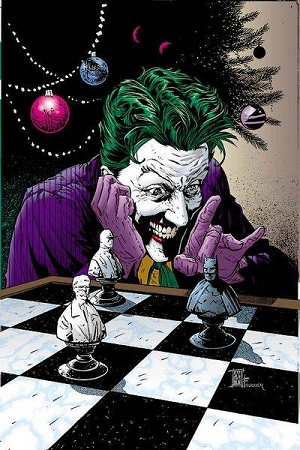 "No chess grandmaster is normal; they only differ in the extent of their madness."
— Viktor Korchnoi, grandmaster
Advertisement:

Many writers view chess players as not just brilliant, but also mad as a hatter. As a result, this trope shows up in various works featuring chess or similar games such as go. Expect rants about conspiracies against the player, bizarre and borderline-OCD match behavior (such as demanding that spectators be seated in a symmetrical manner around the board, or throwing out people whose watches are ticking a bit too noticeably), and, in some cases, violent rage (culminating in flipping the board) or total depression. Expect someone to proclaim at one point that 'It's only a game!', and more often than not, the madman will disagree.

There are a few different reasons for this trope. Some writers may genuinely believe it, or may be alluding to specific Real Life players who were known for being a bit off. Others may be trying to develop An Aesop about the dangers of obsessions; the mad player in this case is almost always someone who spends almost all their time in isolation studying the game. It can also be shown to demonstrate the character's (usually a villain) psychopathy: they view people as pieces to be manipulated on a chessboard. There could also be anti-intellectual messages; if smart people play chess and chess players are nuts, then smart people in general must be crazy.

Expect the effect to be greatly intensified when certain chess variants are played instead, such as 3D chess, chess with a round board, chess with many new pieces, chess where you can't see your opponents pieces, 4-player chess, and even chess with random (and shifting) rules.