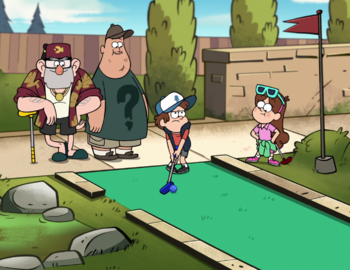 What's a fun, friendly way to introduce a little competition into a series without having to commit to a multi-episode format like a Tournament Arc?

A few rounds at a petite putting green could bring out the competitive side of the characters, or give them an opportunity to meet a villain on more friendly terms. Crafty characters might even build their own mini-golf course out of whatever materials are on hand if they can't get to a real mini-golf green. The courses themselves are likely to feature obstacles in the form of windmills, pirate ships, chomping monster mouths, and miniaturized versions of world-famous monuments - which opens the floodgates for some humorous Monumental Damage if the mini-golf round goes off the rails. Mini-golf rounds can (and often do) devolve into a Bizarre and Improbable Golf Game.

This trope is most commonly found in western media (due to the fact that mini-golf's popularity and cultural relevance has by and large been limited to the United States and Europe).