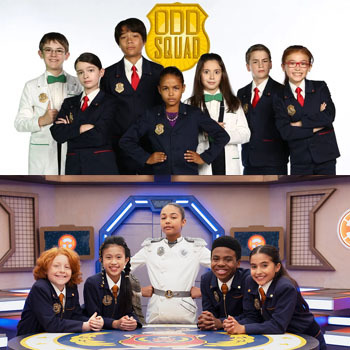 Well, what are you waiting for? DESCRIBE!

Odd Squad is a live-action kids' Edutainment Show that airs in Syndication on various networks, two of the most prominent being PBS Kids and TVO Kids. Created by Tim McKeon and Adam Peltzman, it premiered on November 26, 2014. The show revolves around children who all work for the Odd Squad, an organization run exclusively by kids that investigates and fights anything strange, weird, and especially odd.

Season 3, entitled Odd Squad Mobile Unit, makes another change to the lineup, with the new cast being comprised of Agents Opal (Valentina Herrera), Omar (Jayce Alexander), Orla (Alyssa Hidalgo), and Oswald (Gavin McIver-Wright). Oprah also returns as the Big O in this season, giving cases to the group to have them solve. This season is referred to as a potential Spin-Off by Sinking Ship Entertainment, one of the production companies behind the show, but whether the season is a Spin-Off or not depends on the network. note TVO Kids treats it as a Spin-Off, but PBS Kids, ABC ME, and Fred Rogers Productions (the other production company behind the show) treat it as the third season of the show. An extension of the season, comprised of 13 additional episodes, premiered on July 12, 2021, and introduced two new characters to the main cast: Osmerelda Kim (Glee Dango) and Little O (Shazdeh Kapadia), with Olando (Ari Resnick) joining as a Sixth Ranger.

The show has since branched out into a franchise, with merchandise and numerous other media. For information on those, check the Franchise page.

Full episodes can be viewed here

for those living in the United States. TVO Kids's official YouTube channel also has most episodes from all

, which includes the Odd Squad Healthy Habits videos as well as full episodes and clips. invoked (You might want a VPN to view all of these.)

Don't confuse this with The Fairly Oddparents episode of the same name, nor the former name of the hip-hop group Coughee Brothaz.

open/close all folders
A to M
N to Z