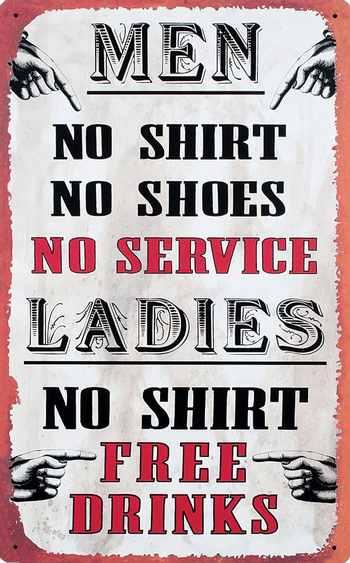 "No I won't calm down. Women are allowed to get angrier than men about double standards."
— Liz Lemon, 30 Rock
Advertisement:

A double standard occurs when members of two or more groups are treated differently regarding the same thing, for instance, a dress code that allows men to wear shorts, but says that women can't. It's not quite the same thing as having two different sets of rules, but the difference can be subtle. Gender is one of the most common causes of double standards, but age, ethnicity, education, economic class, or really, almost any identifiable difference between groups can give rise to them. In fiction and entertainment, gender-based double standards are the ones most likely to be encountered, so they're the ones this wiki focuses on.

Double standards for the genders are very old; separate gender roles have existed for thousands of years. The world has changed since then, of course, but writers (and the tropes they use) can take a long time to catch up. A double standard trope exemplifies this; these are tropes whose persistence reveals our collective assumptions about gender roles, drawing in one fashion or another on enduring, often unspoken assumptions that men should be like this and women should be like that.

Tropes can reveal these assumptions in odd and unintuitive ways. Inverting accepted gender roles in having our rough, tough Big Damn Hero turn out to be female in a shocking plot twist or sight gag can still be Double Standard, since the effect relies on the idea that it's surprising that a woman should be doing these things.

Women are not the only ones confined into gender roles by the assumptions underlying these tropes. Everyone knows that Men Are the Expendable Gender, after all. Other tropes reveal gender assumptions in a more complicated fashion; Double Standard: Rape, Female on Male reveals assumptions about both men and women — women are assumed not to have any sexual potency (so they can't hurt men with sex), and men, unlike women, are not considered 'defiled' or 'deflowered' by sexual acts (so men can't be hurt by sex, unless it's done by another man, sometimes not even then).

Remember that Tropes Are Not Bad, and that many of these tropes are only noteworthy because of their prevalence across entire genres or societies; one example in a particular work doesn't automatically mean anything on its own. It is only the fact that these tropes appear time and again that calls attention to them.

Also, merely being Always Male or Always Female does not a sexist trope make, unless that trope has built-in sexism. In fact, underhanded sexism (of the "frequently sexist in execution or delivery but not sexist in nature" variety; see below) is most prevalent in tropes that are in theory gender-neutral, but whose examples are in overwhelming majority male or female (where one draws the line may be a matter of opinion). Often an issue in works relying on Mars-and-Venus Gender Contrast. Any invocation of Some of My Best Friends Are X (gender, race, other) will tend to rely on a Double Standard.

While the Trope Codifier is on gender, this trope can also affect Race, Religion, Nationality, to even things such as fanbases and more.