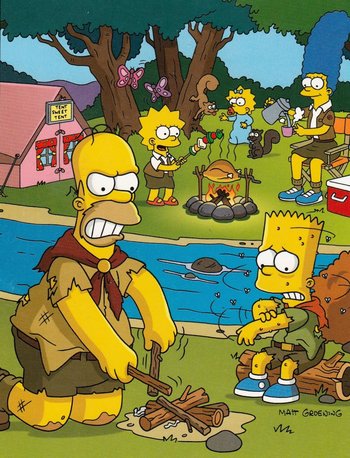 A group of male characters are set to go on some stereotypically male-oriented activity like hiking in the wilderness. A group of females ask to join them and are rebuffed with sexist arrogance on how they would be helpless at the manly activity. Insulted, the female characters go on their own.

As it turns out, the male characters turn out to be completely incompetent in taking care of themselves in the activity while the female characters, who have taken the time to learn how to do the same activity properly, operate as if they had done it all their lives—or, at least, are able to pitch a tent and catch a fish without maiming themselves or setting their station wagon on fire.

In the end, the male characters learn their lesson and both parties finish the activity together in relative harmony.

This type of plot is largely outdated, due to the inherent sexist nature of it against both men and women. The trope implies that men are all stubborn, misogynistic jackasses who are hopelessly incompetent, while also implying that women are better than men at keeping house and cooking, even if it's in the middle of the wilderness.

A subtrope of Don't Go in the Woods. Horrible Camping Trip is this trope without the Anvilicious rebuff of male sexism. This trope is a classic example of Positive Discrimination in action. If this scenario turns into a full-fledged competition, see Girls vs. Boys Plot.

See Cosmetic Catastrophe for the female version of this trope, and Men Can't Keep House for the indoors equivalent.