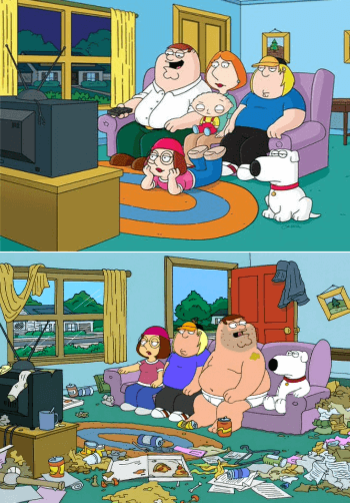 When the wife's away, the house decays.
"Does he wash up, never wash up
Does he clean up, no he never cleans up
Does he brush up, he never brushed up
He does nothing, the boy does nothing."
— Alesha Dixon, "The Boy Does Nothing"note More lyrics: http://www.lyricsmode.com/lyrics/a/alesha_dixon/#share

It doesn't matter if a male character is a globe-trotting super-spy, a hyperintelligent genius, or a Millionaire Playboy — according to this trope, any male who's responsible for maintaining a home, apartment, or regeneration pod will inevitably fail in the most spectacular way possible.

When the domicile is actually shown, expect to see unwashed laundry stuck to the ceiling, mold-covered unspeakables in the near-empty refrigerator, pornographic magazines under the mattress (or out in the open), and empty beer cans and pizza boxes everywhere. If and when a person he is looking to impress (usually his mother, boss, or love interest) comes by, there will be a sudden flurry of activity as the hopeless male shoves everything into a closet in an attempt to instantly clean the place. A variation of this trope appears if the male character is living at home with his parents; in this case, expect his room to be an island of grunge while the rest of the house is immaculately well-kept. Trash of the Titans may be invoked if the mess is of epic proportions.

Some works depict a slovenly bachelor as a shorthand for virile heterosexuality, implying that a true man does not care about the appearance or state of their domicile. By contrast, excessive cleanliness and thoughtful decoration is sometimes seen as a sign of homosexuality, feeding an equally-pervasive stereotype that all gay men are awesome housekeepers, or neuroticism, with all this implies regarding healthy behaviour. In other works, however, a messy, poorly-kept domicile is a shorthand for bratty, self-obsessed immaturity or a very disturbed individual, and so a bad bet that way.

Not that this is entirely inaccurate. Young single men living alone or with other male roommates may not have the time nor the inclination to keep house well, especially when their abode is mostly used for sleeping. In many cultures, women are raised as housekeepers, with the expectation that their place is in the husband's home; consequently, the men are socialized to expect women to take up housekeeping and have never learned such tasks.

This trope is older than you might think. In fact, Betty Friedan pointed out the Unfortunate Implications for women as well as men in The Feminine Mystique in 1963: not only is it rather insulting toward men, but if men simply can't be expected to keep house decently, it follows that housekeeping must be the woman's responsibility, even if she'd rather pursue a career and split the domestic duties. Today this is almost, but not quite, a Dead Horse Trope, especially in Comedies. Growing female workforce participation in many countries around the world has meant that fewer women are full-time housekeepers, which in turn supports a more equal distribution of labour in the household.

A supertrope to A Day in Her Apron, but while that trope contrasts the skills of a couple, this one focuses solely on the inability of men (married or single) to keep house. Might be subverted with a case of Just Fine Without You. The reason why Mess of Woe is chiefly a Male trope.