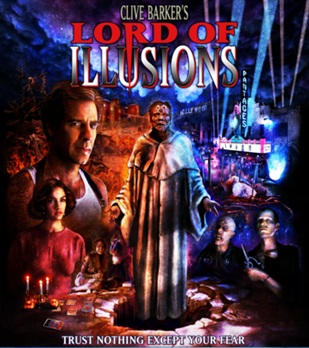 "Flesh is a trap. Magic sets us free."
Advertisement:

Lord of Illusions is a 1995 movie directed by Clive Barker, based on his own short story "The Last Illusion". A blend of noir and horror, the story opens in the early 80s at a run-down cult compound in the Mojave Desert. Nix (Daniel von Bargen), the leader who calls himself "the Puritan," wields magical powers he promises to share with his enthralled followers. Unfortunately for him, some of the group decide Nix has gone too far by kidnapping a young girl. Led by Nix's prize pupil Philip Swann (Kevin J. O'Connor), the rebels manage to overpower and subdue him. They leave him bound in an iron mask and buried deep under the sands of the Mojave, with the loyal followers scattered to the winds.

Thirteen years later, private detective Harry D'Amour (Scott Bakula) is working an insurance fraud case in Los Angeles when he witnesses the murder of Caspar Quaid (Joseph Latimore), one of the group who helped Swann bring down Nix. With his dying breath, Quaid warns that the Puritan is returning.

Shortly after Quaid's death, D'Amour is approached by Swann's wife Dorothea (Famke Janssen) to investigate the killing. He takes the job, and quickly finds himself neck-deep in a battle of magic, illusions, good and evil.