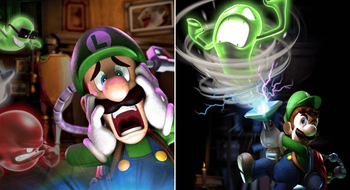 He ain't afraid of no ghost! I mean, he is, but it ain't about to stop him.
"The fearless are merely without fear. People who act in spite of their fear are truly brave."
— James A. Lafond-Lewis
Advertisement:

Not all heroes are fearless. Alice, in fact, is noted for her nervousness, timidity, reluctance to go anywhere near danger — all the hallmarks of a coward. Yet when push comes to shove, she will always step up, doing whatever it takes to accomplish her objective, save her friends, and get everyone out alive — exactly unlike a Dirty Coward or an Accidental Hero.

Unlike Took a Level in Badass, Alice doesn't put off her fearful ways after a single moment of glory. She remains nervous and/or insecure in her daily life despite the fact that she can kick major ass when put to it. But she doesn't seek praise: she will probably tell everyone to Think Nothing of It, because she thinks a 'real' hero is never scared. Alice is likely to be a Combat Pragmatist who gets the job done indirectly, not risking a straight-on fight which she'll probably lose. But however little Alice thinks of herself, her True Companions value her for her courage.

Usually, inverse of Miles Gloriosus. Unlike The So-Called Coward, Alice does not need to be viewed by other characters as cowardly; it is her own opinion that matters. (And the so-called coward may be perfectly confident in his own courage.) Unlike the Accidental Hero, the examples in this trope are characters who deliberately set out to save the day, fears be damned.

Contrast the Fearless Fool, who is never afraid and therefore is never brave. This character type is prone to Heroic Self-Deprecation and a Face Your Fears plot. See also Lovable Coward. One possible way to describe a Weak, but Skilled Paper Tiger. Not unusual for this character to be a Stone Wall. Compare Heroic Neutral.

One of the major subtropes of the Classical Antihero.

Midori gives an epic speech to the intimidating student council committee despite looking like she's about to cry the whole time.

Midori gives an epic speech to the intimidating student council committee despite looking like she's about to cry the whole time.