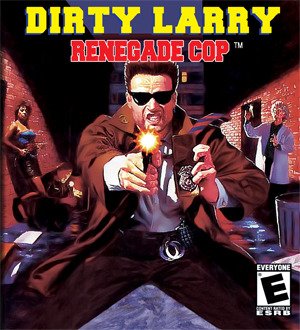 Dirty Larry is Shooting You.
Captain: Senator Mendoza is one of the most respected men in this state, McBain. And you drove his limo off a cliff, broke the necks of three of his bodyguards, and drove a bus through his front door?!
McBain: But Captain, I have proof dat he is head of an international drug cartel!
Captain: I don't wanna hear it, McBain! You're outta here!
[McBain punches the captain out a window.]
McBain: That makes two of us.
— The Simpsons, "The Way We Was"
Advertisement:

He's a loose cannon, but DAMMIT he's the best we have!

Sure, our society may be built upon rules and procedures, but they usually make for bad television. Sometimes you have to bend the rules, rough up the suspects, moon your supervisors and shred the Constitution to get stuff done.

A Cowboy Cop may be an Anti-Hero (or an occasional Byronic Hero) if he is the protagonist of the show, typically Hot-Blooded and passionate about his maverick antics, or a Jerk with a Heart of Gold whose unlikely claims will generally be proven correct. However, in shows that feature cops as secondary characters, the Cowboy Cop is often at odds with the main characters, as he will trample all over the crime scene and/or the suspect's rights. If Da Chief is a Cowboy Cop he would often reprimand the naive upstart who is being too soft with the criminals and will gladly let the loose cannons go in shooting first and asking questions later.

He will usually be a detective, as a beat cop is much less likely to be intimately involved in a case's full duration.

In a SWAT Team type situation where the cops are expected to shoot to kill, he does not care about human shields or property damage and will more often than not almost level the place to take down the suspects (especially with a car or truck), with extreme lethal force.

Cowboy Cops are almost always asked to Turn in Your Badge by Da Chief, at which point they usually become a Vigilante Man in regards to whatever bad guy they are after for either the rest of the movie or until they get their badge back. As a result of his flagrant rule-breaking, Internal Affairs hates the Cowboy Cop with a passion. Often policemen who oppose the Cowboy Cop are revealed to be Dirty Cops, scared that he's going to shake up the system they've worked so hard to manipulate in their favor. As part of being unorthodox, the Cowboy Cop often has at least one contact on the street to feed him information that can't be obtained through an official channels.

Just as with cowboy sheriffs in the old west, cowboy cops rarely show any remorse for using lethal force. First kill scenarios are rarely depicted; these guys (and occasionally gals) have usually filled whole cemeteries to capacity before we meet them for the first time.

Being a Cowboy Cop may be just be backstory — the character might make the transition to another field such as being a federal officer, a Man in Black or a Deep Cover Agent, where their methods might fit in a little better.

May often be the recipient of Arson, Murder, and Lifesaving.

Compare Bunny-Ears Lawyer. Contrast By-the-Book Cop. Compare and contrast Dirty Cop and Rabid Cop. While a Cowboy Cop is generally more well-intentioned than a Dirty Cop, more deconstructive works will concede that they both show equal scorn for necessary regulations; meanwhile a Rabid Cop is a Cowboy who's lost all sense of perspective and morality. For the military version, see Military Maverick. Old-Fashioned Copper is the specifically British subtrope. For a policeman involved with literal Wild West cowboys, see The Sheriff.

Be aware: pretty much everyone hates cowboy cops in Real Life. They don't solve cases, they cause cases to collapse in court, vital evidence to be ruled inadmissible, compromise investigations and in worse case scenarios get people killed.