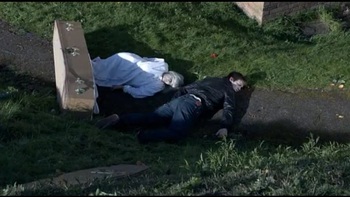 A Sub-Trope of Disposing of a Body, this trope involves hiding a body in a coffin that is already scheduled to be buried or cremated. This can be done with the connivance of a crooked funeral director or, for the more desperate or less organised, by breaking into a funeral home the night before a funeral.

If it is done by a crooked funeral director, then the concealment may involve a false bottom in the coffin. Otherwise, the second corpse will just be shoved under the first and the lid screwed back down.

In fiction, at least, this ploy will usually be discovered when the pallbearers drop the coffin due to the extra weight, and two bodies spill out.

A variation involves burying a body in the bottom of a newly dug grave, so a coffin will be placed on top of the corpse and the grave filled in.

Contrast Together in Death, where lovers in life get buried together after they die. A sister trope is Coffin Contraband, where something other than a body is hidden in a coffin. Bodybag Trick is when a coffin is used to smuggle a living body.