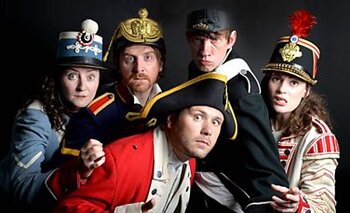 Radio sketch show from The BBC, written by and starring John Finnemore of Cabin Pressure, along with Carrie Quinlan, Margaret Cabourn-Smith, Lawry Lewin and Simon Kane.

In 2021, the ninth series was broadcast in an experimental format due to the COVID-19 pandemic meaning it was produced remotely with no audience; instead of traditional unconnected sketches, these episodes each followed a single character in the same family for a series of vignettes presented in reverse chronological order. Due to the increased continuity and recurring characters this series has its own list of tropes provided separately from the rest of the show. A guide by Finnemore himself on how best to follow the series is available here

Well, since you ask me for a list of tropes in John Finnemore's Souvenir Programme, I do have an alphabetised assortment of common narrative elements you may find... egregious:

open/close all folders
Series 1 to 8
Series 9 Only