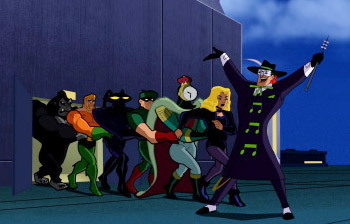 The Music Meister is the man that the world shall obey!
"I'm the heart of swing, I'm the twist and shout.
When you gotta sing, when you gotta let it out."
— Sweet, Buffy the Vampire Slayer, "Once More With Feeling"
Advertisement:

The Music Meister is a character who causes others to break out into spontaneous song and/or dance. Often used as a justification for a Musical Episode, in which case Genre Savvy characters will question (possibly in song) why they are suddenly acting like characters in a musical.

To qualify as The Music Meister, a character must have an explicit power to cause others to break out in song, and the musical interludes should be commented on as being out of the ordinary.