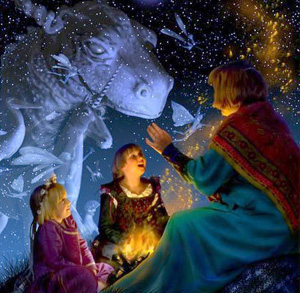 "Once Upon a Time..."
Advertisement:

One of the oldest archetypes and basically the seed from which This Very Wiki grows; a character that is noted for their ability to tell tales, or at least their propensity to do so.

Sometimes the tales have a purpose in the main plot, maybe even as a Framing Device. At other times it is simply an interesting side excursion, perhaps to give the setting a feeling of depth.

Sometimes overlaps with Miles Gloriosus and The Münchausen. Could conceivably be made to overlap with Intrepid Reporter. Possibly a reflection of Most Writers Are Writers. Compare with The Bard.