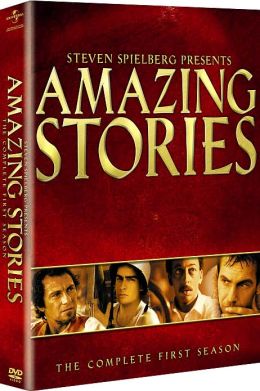 Amazing Stories is a 1980s TV series produced by Steven Spielberg for NBC. This Genre Anthology series is similar to The Twilight Zone, although with a distinctly larger proportion of happy endings. The show had very impressive visual effects at the time. Of course, given Spielberg's involvement, that's not surprising. It also had episodes directed by people who hardly ever do television (Robert Zemeckis, Clint Eastwood, Martin Scorsese, etc).

Despite all this, the series didn't do that well in the ratings. It lasted from September 1985 to April 1987 for a total of 45 episodes in two seasons. Still, a revival was announced in 2015

For tropes in "Family Dog" and its spin-off series, please see the relevant page.