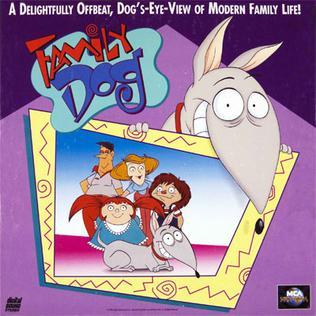 In 1987, the anthology series Amazing Stories premiered an episode entitled Family Dog. Created by Brad Bird, it told the story of a dog owned by the Binsfords, a very dysfunctional family consisting of Skip and Bev, the frustrated, careless parents; Billy, the destruction-loving son; and Buffy, the young daughter.

Fast forward six years later, when a primetime series based on the episode premiered to capitalize on the success of The Simpsons alongside Fish Police, and Capitol Critters. The series was produced by Nelvana, Amblin Television, Universal, and Warner Bros., and aired on CBS.

13 episodes were planned; however, only 10 were aired, and after that the show got cancelled.

Not to be confused with Family Guy.

The Amazing Stories episode and the series provide examples of: