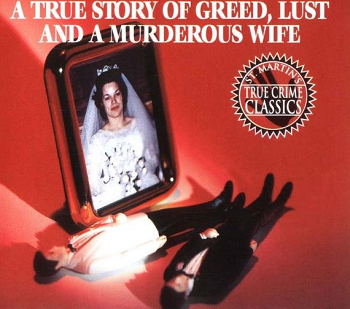 "Husbands should be like Kleenex: soft, strong, and disposable."
— Mrs. White, Clue
Advertisement:

The maneater, the woman whose husbands/Love Interests keep on dying.

Usually, a Black Widow is a cross between a Con Artist and a Serial Killer, a woman who seduces, marries, and then murders men for their money, always using a different name and identity each time to keep the police and her intended victims from twigging to her real identity. She's very much a highly successful vamp.

Black Widows' methods may vary, but poisoning is often favored: it doesn't demand superior strength or leave obvious marks, and it's traditional for wives to do the cooking for their husbands. Also, many types of poisoning can have symptoms similar to those of common illnesses, which makes it easier for a Black Widow to collect life insurance money (a very common motivation).

There are too many Truth in Television instances to count.

Occasionally there are more nefarious methods.

The name "black widow" comes from the official FBI designation for this kind of killer and from the black widow spider, which is so named because of the occasional habit of female black widow spiders (particularly the Australian redback spiders and the southern black widows) to devour their mates after mating. For this reason, the trope may be paired with Arachnid Appearance and Attire to really drive the spider metaphor home.

A Sub-Trope of Sleeping Their Way to the Top, Til Murder Do Us Part, and Gold Digger (this one prefers to kill her Meal Ticket instead of living with him).

A Sister Trope to The Bluebeard (the Spear Counterpart).

Compare Yandere, Comforting the Widow, Widow Woman (for other widow tropes), Will and Inheritance Tropes and Cartwright Curse. When pregnancy is involved, this intersects with Conceive and Kill. See also Literal Maneater, which is an actual monster that uses the disguise of a woman to lure in its prey, and Mantis Mating Meal, for another animal notorious for the female killing the male.

Not to be confused with Out with a Bang or any of the many characters named "The Black Widow", including the comic book character or female Chechen suicide bombers

The opening cutscene in "Jailbreak" implies that the Contessa poisoned her wealthy husband to gain control of his estate and fortune.

The opening cutscene in "Jailbreak" implies that the Contessa poisoned her wealthy husband to gain control of his estate and fortune.