Film / So I Married an Axe Murderer 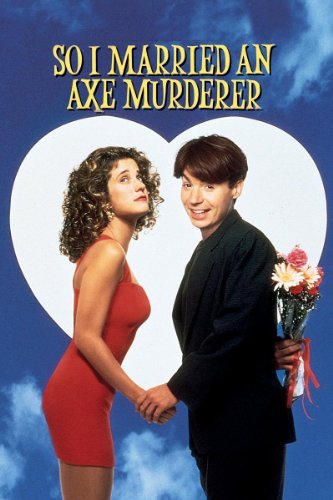 Charlie MacKenzie is a beat poet living in San Francisco, after having broken up with yet another girl based on paranoid perception. His policeman friend Tony tries to point out the pattern; that Charlie simply is afraid of commitment and tries to think of, or invent, any reason to break up with someone. Things pick up again when Charlie meets a butcher named Harriet, and becomes infatuated instantly. As the plot continues, Tony realizes that Harriet may be the mysterious "Mrs. X", a Black Widow who had married and killed multiple husbands. After marrying Harriet, Hilarity Ensues when both Charlie and Tony try to discover if Charlie has hitched himself to certain doom.

Released in 1993, this Black Comedy starred Mike Myers as Charlie (plus his dad Stuart), Nancy Travis as Harriet, and Anthony LaPaglia as Tony. It was a box-office disappointment as it earned less than half of the movie budget while on the big screen.

plans for a spin-off series called The Pentaverate. It focuses on a Canadian journalist's attempt to expose a secret society that's been secretly influencing world events since 1347 - one mentioned by Stuart in this film in a throwaway joke. It was released on Netflix on June 5, 2022.