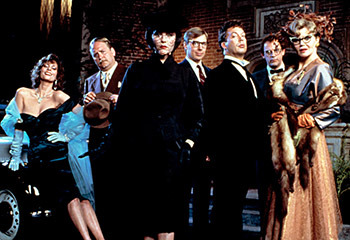 Quite possibly 1985's best movie based on a board game, Clue is a murder mystery/comedy film based on the board game Clue (or Cluedo, depending where you live). The film justifies the game's premise (a large mansion full of people with silly names trying to solve a murder mystery) by turning all of the characters from the board game into blackmail victims using predetermined aliases.

The six guests travel to the remote mansion after receiving an invitation from the butler, Wadsworth, to expose his employer, Mr. Boddy, as a blackmailer. Mr. Boddy turns the tables on the plan: he gives everyone a weapon and asks them to kill Wadsworth so no one will have their secrets exposed. When the lights go out, someone kills Mr. Boddy; since everyone has both the means and a motive to turn Boddy into a body, everyone becomes a suspect in his murder. The group opts to solve the case themselves rather than call the police, and Hilarity Ensues—and in a good way. While made in The '80s, the film sets its story in 1954 (and in New England) to justify both the large mansion and the politically-charged secrets of its main cast.

That was one way the description could have ended. But how about this?

Clue bombed in theaters, partly because of the movie's Multiple Endings. In theaters, the solution to the murders changed depending on where you saw the movie; viewers couldn't deduce the murderer from the clues presented, since other options had to remain viable in order to accommodate the other endings. This was harshly criticized by reviewers, who apparently didn't know a zany comedy couldn't have a real mystery happening. The home video and TV versions of the film include all three endings; these cuts mark two endings as "how it could have happened", while marking the third ending as "how it really happened". The DVD and Blu-Ray releases enable viewers to play one ending at random or all three endings as described above.

But here's what really happened.

Although it bombed in theaters, Clue eventually became a Cult Classic. Fans regard it as a solid comedy with a mix of clever dialogue and slapstick, and the various solutions to the murders (mostly) hold up on repeat viewings.

Do not confuse this film with Cluedo, the 1990–93 British TV adaptation of the board game (which, unbelievably, was a Game Show). The 1992–93 Australian TV adaptation, also called Cluedo, was a kind of game show where pre-recorded scenes showed how a guest star was murdered every week, and the actors playing the six main characters were questioned by a live studio audience, which was also filmed so the TV audience could play along as well (only the week's murderer could lie, all the other suspects had to tell the truth)—which meant that the TV audience had to depend on the studio audience to ask the right questions. Then another pre-recorded section showed the solution.

"Okay, Chief, take them away. I'm going to go home and sleep with my wife."
Feedback

Example of:
Everybody Did It