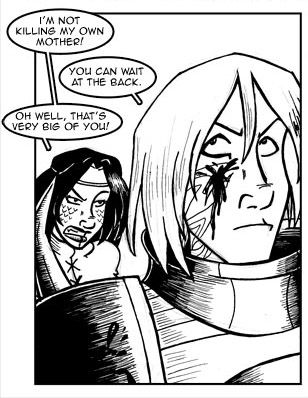 In fact, the story begins with a knight named Gort discovering that when making a Deal with the Devil, usually you aren't going to get away with a double-cross. Not one to take death lying down, he rapidly returns from Hell. Gathering up his True Companions (the ones he hasn't killed yet), he embarks on his quest for invincibility. Too bad several members of his group have their own motivations. Not to mention the Evil Twin (which would be good in this case). Add in Gort's old rival returning from Heaven and you begin to get an idea of the plot.

The second major arc is about the war against "The Worm Lord", who starts as a disturbing rumor before becoming a tangible enemy.

The artist, Kate Ashwin, has since started another webcomic, Widdershins.