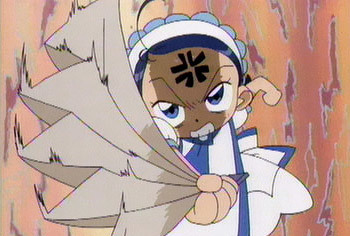 It's just an ordinary, if large, paper fan — accordion-pleated white paper, taped at one end to form a handle, but some characters wield them the way others do the dreaded Hyperspace Mallet, and get much the same results — the unfortunate target usually goes rolling down the street from the force of the blow.

Sometimes used as a symbol of dubious authority, the paper fan (or harisen in Japanese) has roots in the Japanese equivalent of vaudeville comedy, particularly of the slapstick variety — and like an actual slap stick

it makes a lot of noise with little real hurt. It is the tool of a tsukkomi, or "straight man", of a standard two-man comedy team in a kind of routine common to the Kansai region called manzai; it's used to upbraid the other member of the team (the buffoonish boke) when he says or does something foolish. Naturally, this has been carried right over into anime and, being a tradition stemming from the Kansai region, it should be noted that, usually, either the wielder or the target are The Idiot from Osaka.

This may go back even further though, since fans with sharpened metal ribs were allegedly used as weapons of war and assassination, being particularly suited to the latter due to ease of disguise. (In fact; there are arts about using fans, as well as fans made for weapons). For such weapons, see Combat Hand Fan, though these two tropes can overlap.

A similar western version is the archetypal rolled up newspaper. Compare Dope Slap. If the paper fan is used as an actual weapon, see Combat Hand Fan.

Has nothing to do with the dangers of fans with exposed rotating blades.

Clem, the Boss Ghost of Floor B2, attacks Luigi with a paper fan.

Clem, the Boss Ghost of Floor B2, attacks Luigi with a paper fan.