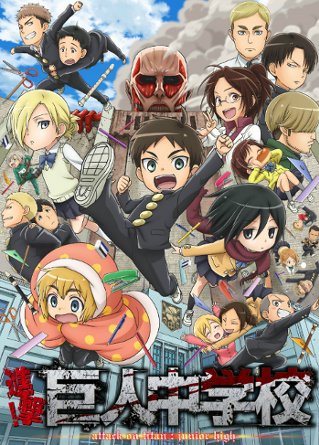 War against drowsiness, middle school classes!
"That day, the human race remembered: the terror of being dominated by them, and the shame of being held captive in a birdcage."
Advertisement:

Attack on Titan: Junior High (進撃！巨人中学校, Shingeki! Kyojin Chuugakkou, "Attack! Titan Middle School") is a Spin-Off Babies Affectionate Parody of Attack on Titan. The manga is by Saki Nakagawa and supervised by Hajime Isayama, debuting in 2012. Taking place in an Junior High School A.U., this series follows the everyday life of Eren and Mikasa and their wacky junior high adventures. A 12-Episode Anime adaptation by Production I.G* with assistance from Graphinica and Asahi Production (returning from the mainline series) started airing in October 2015, like the main anime, it was licensed and simulcasted by Funimation with the latter receiving a broadcast dub in November.

The manga was serialized in Bessatsu Shonen Magazine from 2012 to 2016 and compiled into 11 volumes. It later returned with the short sequel Attack on Titan: High School – Youth! The Marley Academy Next Door, which adapts the original series' Marley arc and ran from June to August 2018.

NOTE: This series is a parody of Attack on Titan and many of the jokes reference material from the show. Be aware of spoilers.