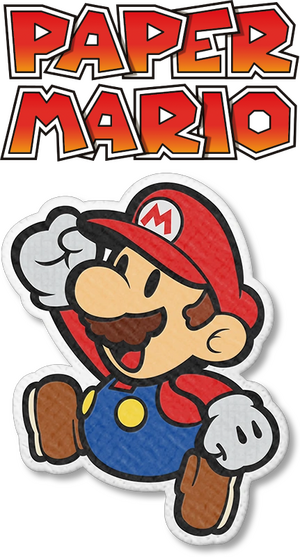 (For the first game in the series, see here)

Paper Mario is a Role-Playing Game Spin-Off series of Super Mario Bros. developed by Intelligent Systems (who also developed the Nintendo Wars series and Fire Emblem series) following the general idea of Super Mario RPG (its working title was Super Mario RPG 2), but with an art-style where everyone is as thin and two-dimensional as paper (hence the name). The original game debuted on the Nintendo 64 in 2000, later being one of only ten games released for the systemnote Conker's Bad Fur Day, Bomberman 64, Dr. Mario 64, Animal Crossing, Tony Hawk's Pro Skater 2, and some others in North America in 2001, a year that saw twice as many GameCube games released despite that system not debuting until November.

The series stands out among RPGs in a number of ways. They break up the static turn-based encounters of many Eastern RPGs with Action Commands and the ability to hit enemies (which exist on the screen before the battle starts) on the field for a "First Strike". The battle system is significantly simpler than the norm for RPGs. Mario is typically the only playable character in battle, though in certain games he is accompanied by one of his partners, who have limited abilities and options in comparison and are upgraded instead of levelling up normally. The functions in the code used to calculate damage are also much simpler, using addition and subtraction as the main operations for this purpose; for example, if you have an attack stat of seven, and the enemy has a defense stat of five, the enemy sustains two points of damage. There's also no "speed" stat which determines who goes first; Mario always goes first, then his partner (if he has one), then all the enemies in order from front to back before repeating. Main equipment is limited to Mario's weapons—his boots (for the jump attack) and hammer—which are automatically upgraded at certain points in the game (also adding new abilities for the overworld). Certain games also feature Badges, items that are equipped using Badge Points and have various effects on Mario or his partners. They give him new abilities, increase his offense or defense, give him an edge against certain enemies, change visuals or sound effects, or even put him at a disadvantage to make the game more challenging.

The first three games follow a similar formula. Each game is broken down into a prologue and eight chapters. In the first seven chapters, Mario and his gang of partners rescue seven mystical objects (much like those in Super Mario RPG), which have the power to stop the bad guys. In the first two games, these stars also give Mario unique powers that require star energy that slowly regenerates in battle (both games feature ways to speed up the process, while the sequel ties it to the audience). Other standbys include the ability to cook items, entertaining recurring bosses, and giving Peach a role of more than just a Damsel in Distress: while she is taken captive by the bad guys in the first two games, she spies on them to help Mario. Super Paper Mario, the third of these games, is the Oddball in the Series for Paper Mario, being an action platformer with RPG Elements instead of a full RPG, though it shares tone and formula with its predecessors.

The fourth game, Sticker Star, started a large-scale upheaval of the series; it and its sequels are part of a different story continuity that doesn't reference the first three games often. To make Paper Mario fit better with the main Super Mario Bros. universe, most original characters and designs were dropped in favor of using unmodified enemies and characters from the main series, save for one or two new faces per game. Mario is now only accompanied by a power-granting Exposition Fairy and an occasional temporary partner. Battles are simpler: Mario no longer has Flower Points (the series' equivalent to Mana) and instead uses consumable items to perform stronger attacks, and experience/levelling up is replaced with gaining more coins and items from fights. Since battles are less involved, the games are focused on puzzle-solving and overworld exploration. Sticker Star and beyond lean much heavier into the diorama-based aesthetic of the series, adding in arts-and-crafts mechanics and visual gags.

The whole series is known for its witty dialogue and writing, giving many comedic moments of Leaning on the Fourth Wall and self-parody

Dimentio kills Nastasia and proclaims his intention to destroy the entire multiverse and rebuild it in his image.

Dimentio kills Nastasia and proclaims his intention to destroy the entire multiverse and rebuild it in his image.