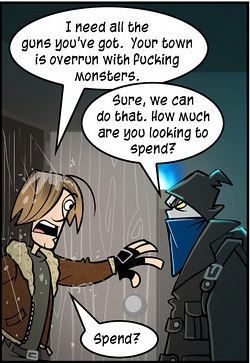 And that's why he says "What're ya buyin?", not "What're ya havin?"
Wakka: We gotta pay?! If we lose, you'll die too, buddy!
Rin: I have faith in your victory.
Wakka: Gee, thanks!
— Final Fantasy X
Advertisement:

So you're the plucky group of young heroes out to defeat the Evil Overlord and bring peace back to the world. You'd think that means that shopkeepers might give you discounts or even free items — after all, you're protecting them and ensuring they'll still have not only their shops but also their businesses in the future. And, y'know, their lives.

But nope. You still pay full price, same as everybody else.

Even for more localized examples, where you'd think it'd be more personal: You've driven all the local bandits out of the peaceful hamlet and put their mob's leader to the sword, and even the shopkeepers will actively thank you for saving the place, but they still charge you full price. (Ironically, this often turns up in a story where the good guys tend to get Hero Insurance all the time.)

Happens especially in web-based Flash Games: You may be the chosen one, they may plead with you to save their village/island/country/world from destruction, but unless you rustle up an incredible amount of money (from behind the Insurmountable Waist-Height Fence maybe?), you'll never get the best armor and weapons that you would need to do it with.note  Then again, since Chosen Ones are likely to have some repute, wouldn't it make some degree of sense to advertise that the equivalent to a celebrity shops at your store?

See also Adam Smith Hates Your Guts, which is where shop prices steadily rise regardless of how much sense this makes, and Karl Marx Hates Your Guts, where prices stay the same, again, regardless of logic. Also, see Dude, Where's My Respect? and With This Herring for when you're deliberately underequipped. May tempt some into trying to get a Ballistic Discount or a Five-Finger Discount. This is averted with Hospitality for Heroes and Discount Card.