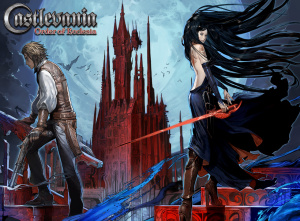 Her face is up there.
Advertisement:

Castlevania: Order of Ecclesia was released for the Nintendo DS in 2008.

The story takes place in the middle of the 19th century, several decades after Castlevania: Symphony of the Night. Dracula has been sealed, but evil is still afoot. With no Belmont in sight, the church has been desperately trying to find a way to destroy Dracula once and for all that doesn't involve the Vampire Killer whip.

Enter the Order of Ecclesia, whose glyph-based magic system has made great progress. They have discovered a spell, Dominus, that has the power to destroy Dracula once and for all. Shanoa, under her master Barlowe's order, plans to absorb the glyph and destroy Dracula.

Unfortunately, Albus, a member of Ecclesia and a close friend of Shanoa, chooses then to interrupt the ceremony; he attacks Barlowe and runs off with Dominus. Shanoa recovers a few weeks later, having lost her memories and her emotions as a result of the incident, and learns Albus attacked Wygol Village and kidnapped all the villagers. Barlowe sends her off to rescue the villagers, recover Dominus, and fulfill Mankind's Greatest Wish.

Compared to the other DS games, Order of Ecclesia is much harder. Shanoa cannot take many hits, her ability to attack is limited by her MP (granted, it fills up much more quickly than it has in previous games, but it's still a major limiting factor,) and leveling up doesn't make hard enemies suddenly trivial. Shanoa can absorb glyphs from fallen foes and can combine them for stronger attacks. Another dramatic change is the map structure: Rather than making use of large, sprawling maps, the game primarily employs much smaller maps that focus on action rather than exploration.

Order Of Ecclesia provides examples of: