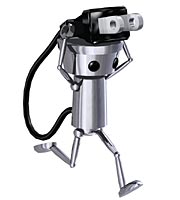 A quirky, offbeat Adventure Game with the guts of a platformer, Chibi-Robo! tells the story of the Sandersons, a seemingly average suburban family. For her birthday, 8-year-old Jenny Sanderson receives a "Chibi-Robo", a tiny, 4-inch tall Robot Maid with a hyperspace head, a neurotic flying sidekick, and the ability to turn just about anything into a useful tool. By design, Chibi-Robo is supposed to perform simple household tasks: Cleaning up, entertaining children, cooking—the basics. But this particular Chibi-Robo doesn't have it so easy, as he becomes a kind of Armchair Psychiatrist to the Sandersons and all of their severely messed up toys.

What? Did we forget to mention that all of the toys in their house are alive? Silly us.

Released in 2005 for the GameCube, Chibi-Robo! is considered something of a cult hit. It was critically praised, but sold poorly—partially due to its odd nature and partially due to the overall bad sales of the system it was on. Nintendo included it as one of their "New Play Control!" Updated Rereleases for Wii, but only in Japan. Still, if you have a Wii (or still have a GameCube kicking around), check this out—it's quite fun, cute as a button, and unexpectedly moving.

Despite the poor sales, it managed to spawn a very cute sequel called Chibi-Robo! Park Patrol on the Nintendo DS, this time with a Green Aesop thrown in; but as it was a Walmart exclusive for a while after release, it didn't sell very well either.

A third entry, Welcome Home, Chibi-Robo! Happy Rich Big Sweep was released in Japan for the Nintendo DS in Fall 2009, but passed most of the country by due to lack of advertising.

A 3DS game subtitled Photo Finder appeared on the 3DS, including Augmented Reality features where Chibi-Robo was tasked with finding items and objects called Nostaljunk by taking pictures of real world objects.

Another 3DS game, named Chibi-Robo! Zip Lash (or Go! Go! Chibi-Robo! in Japanese) was announced in May 2015 and released on October 9, 2015 in North America. It features a sidescrolling, more traditional platforming style of gameplay, with gameplay reminiscent of Bionic Commando and Castlevania which has Chibi-Robo hunting down snack-stealing aliens while using his extending plug cord as a whip. It is also compatible with an adorable Chibi-Robo amiibo allowing access to a capsule machine and Super Chibi-Robo.