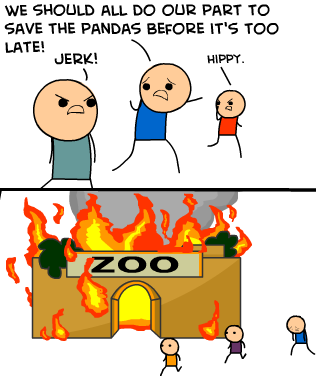 "It is all that is left unsaid upon which tragedies are built."
— Kreia, Star Wars: Knights of the Old Republic II: The Sith Lords
Advertisement:

In many stories, particularly those that rely on Dramatic or Tragic Irony, miscommunication and misunderstanding can often play a role in setting off or allowing bad things to happen. This often happens in mystery stories, such as where a murderer kills an innocent victim due to a misunderstanding, as well as in Tragedies, where poor communication is often the result of the characters' own Fatal Flaws, which lead them to commit Tragic Mistakes that pave the way for everything to go pear-shaped. This is also an all-too-common occurrence in Real Life, where many real life tragedies could have been avoided had the right people shared information that could have prevented them, but didn't for all kinds of reasons.

In order for this trope to work, the misunderstanding or miscommunication needs to have a reason to occur, best borne out of the natural characterization of the characters involved. A character who has a hard time trusting someone, for example, is more likely to dismiss that someone's explanation of what's going on out of hand than to hear the person out. Someone who is naturally shy or has No Social Skills may also have trouble getting their point across. A Horrible Judge of Character may implicitly trust a villain who wants nothing but bad things for him, and tend not to believe those who tell him of the villain's evil intentions. A Ditherer may refuse to speak up on something because it would mean having to make a choice one way or the other.

Basically, the miscommunication or misunderstanding should be borne out of flaws and behaviors that a character has had from the start rather than something that happened because the author needed a story to go a certain way and derailed the characters involved, making them hold the Idiot Ball. Alternately, if everyone in the story has unreasonably bad communication skills, it may be an Idiot Plot. Authors who pull this trope badly run the risk of straining the audience's Willing Suspension of Disbelief.

Though similar, this trope does not include things like Selective Obliviousness, You're Just Jealous, or Sarcastic Confession, as those are failures to listen rather than speak (though listening is also a vital part of good communication).

Contrast: Just Eat Gilligan, Amnesia Danger. See Facial Dialogue for those times in which a character seems unable to communicate, but actually can get entire encyclopedias of information across with just body language and a twist of the eyebrow. When communication is impeded not by character flaws but because of an outside force, see Impeded Communication.

Works using this trope will often discuss The Power of Language.

This is a trope rife with major plot points by necessity. Spoilers shall be unmarked.