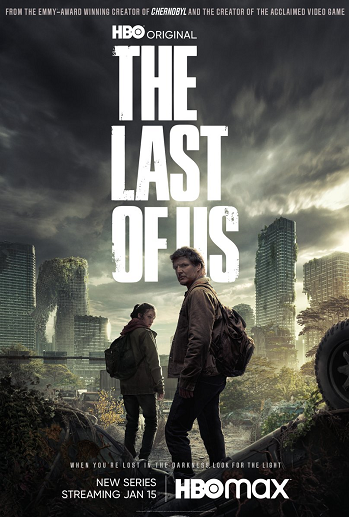 "Save who you can save."
"You keep her alive... and you set everything right."
—Tess Servopoulos
Advertisement:

The Last of Us is a post-apocalyptic drama series based upon the PlayStation video game of the same name created by Naughty Dog. It was developed for television by Craig Mazin (Chernobyl) and Neil Druckmann (writer and director of the original game). The series premiered on HBO beginning on January 15, 2023.

Set in an America beset by fungal zombies, the series stars Pedro Pascal as Joel, a man broken by the loss of his daughter (Nico Parker). He finds himself an unlikely second chance when he takes on a mission to escort young Ellie (Bella Ramsey) on a dangerous journey across the once great nation. Also starring are Gabriel Luna, Anna Torv, Merle Dandridge, Murray Bartlett, Storm Reid, and Nick Offerman.

♫ The roses have faded, there's frost at my door
The birds in the morning don't sing anymore
The grass in the valley is starting to die
And out in the darkness, the whippoorwills cry. ♫
Feedback

Joel takes off some wooden floorboards to get his secret stuff hidden.

Alternative Title(s): The Last Of Us

Joel takes off some wooden floorboards to get his secret stuff hidden.