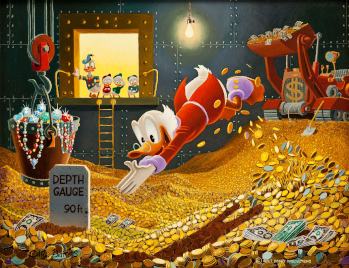 Scrooge McDuck takes a swim in his literally liquid assets.
"Aaahhh! It's not a liquid! It's a great many pieces of solid matter that form a hard, floor-like surface! Aaahhh!"
— Peter Griffin deconstructing this trope, Family Guy, "Lottery Fever"
Advertisement:

The greedy character finally has his desired fortune piled under his feet, he couldn't be any more glad. So how does he enjoy this moment? He dives into the pile and gleefully swims around like it was the best swimming pool ever, or rest on it like you would while floating peacefully.

As the page quote demonstrates

, pooling together large quantities of small, solid material won't magically give it the properties of a liquid, as anyone who's ever laid down on sand at the beach can tell you. In fact, diving into a pool of gold coins won't be much different from diving into a giant solid block of gold. But you can't let a little thing like physics get in the way of demonstrating a perfect example of just how wealthy a character can be. The effect can also be achieved (much more realistically) with dollars/bills, which are softer and, when pooled together, much more malleable (though you may run the risk of a few papercuts).

It doesn't have to be actual currency; it could be jewels, treasures, some valuable fluid or pretty much anything the character wants.

Subtrope of Conspicuous Consumption. May overlap with Money Fetish and Sand Is Water. Often a part of an If I Were a Rich Man fantasy.

Not to be confused with Liquid Assets, or with the standard usage of "pooling" funds, that is, raising them among a group of people to be distributed in case of some emergency, or as a prize. See also Dragon Hoard.