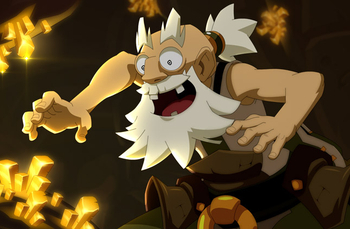 Gold. Those who have it can't let it go, those who don't have it covet it. There's something about it that just gets to people's heads, something beyond its simple monetary value. Characters who come across a trove of gold (or silver, gems, cash or other treasure, but most often yellow gold) will almost inevitably become obsessed over it to the point of near lunacy. This typically manifests as single-minded greed and jealousy, with characters putting their newfound need to hoard wealth above any previous goal or attachment that they may have had. The actual source of wealth can be almost anything — a rich mine or deposit, a successful bank heist, buried Pirate Booty, the spoils of war, a dragon's treasure — but the effect will be the same.

Sometimes, if the characters in question are expecting to gain a great deal of wealth through whichever means, they may consciously try to avert this trope and plan to split the wealth fairly and only take what they can carry or need for a comfortable life. But all of this will be forgotten the very instant that the wealth is in sight: people will rejoice, stuff bags and pockets with treasure and obsess over how rich they now are... until it inevitably occurs to them that they'd be even richer if they didn't have to share it with all these other fellows...

By the end of it, you can expect all signs of sanity or survival instincts to go right out the window as the characters obsessively try to hoard as much as they can, and lifelong friends to fly at each other's throats for just one more shiny coin...

There's probably nothing that can be more destructive to a circle of True Companions than this, for Gold Fever is a moral disease as well as a mental one. To be infected with it leaves one vulnerable to the effects of karma and removes all protections one gets from being an upright hero. Fortunately, most heroes infected with Gold Fever realize what dinks they're being and turn back into their own noble, non-greedy selves just in time to avoid killing each other or being crushed by the Treasure Room's bamboo-powered boobytraps. Though sometimes they make off with a teensy partial sum of it if the writer thinks they deserve it.

Villains who have been infected with Gold Fever don't make out nearly as well as heroes. They're almost certain to bump each other off and/or end up tripping headfirst into a Lava Pit while clutching a golden trinket and hissing insanely: "It's mine! ALL MINE! MIIIII—" *FLOOP!* In fact, the main cause of Karmic Death is a villain's own avarice, and their inability to see what danger they're in while they're trying to satisfy it or the inability to let go when it starts to interfere with their immediate chances of survival (like if they're stupidly trying to drag heavy gold bars with them and are thus caught in a Death Trap that they'd otherwise have been able to evade). Even the most brilliant and street-savvy of villains can find themselves holding the Idiot Ball when Gold Fever strikes. And being already insanely wealthy is no protection against Gold Fever. In fact, wealthy characters seem even more inclined to take leave of their senses when Gold Fever strikes, most likely because the existing drive which led them to become wealthy in the first place is a fire that Gold Fever is just adding fuel to.

Don’t expect anyone to give much thought to what they're going to do with all this wealth, how they'll carry it away, or how they'll defend it and themselves from other people with Gold Fever. Foresight is generally one of the first things to go in these situations.

While this pernicious disease can affect almost anyone, western dragons, dwarves and crazed prospectors seem to be particularly vulnerable to its effects.

See also Artifact of Attraction, Money Fetish, Prospector and especially Greed. Related is Apple of Discord, where greed might not be the primary motivation, but the end result still turns out to be a free-for-all. Contrast with Worthless Yellow Rocks, where someone regards gold (or something else generally considered valuable) as useless junk.