Film / Bullet in the Head 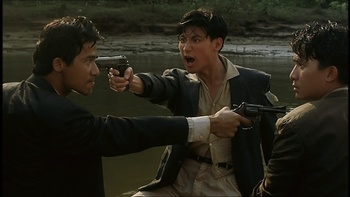 "You want revenge, motherfucker? I never lose any contest, not in Vietnam and not tonight!"
— Paul
Advertisement:

Bullet in the Head (Chinese: 喋血街頭, "Dip Hyut Gaai Tau", meaning "Bloodshed in the Streets.") is a 1990 Heroic Bloodshed film by John Woo.

Paul (Waise Lee), Ben (Tony Leung Chiu-wai) and Frankie (Jacky Cheung) are three poor hoodlums in 1967 Hong Kong. Ben wants to get married and find a better life for himself, something that's quickly kiboshed when he and Frankie accidentally kill a rival gangbanger in revenge for him jumping Frankie earlier. In desperation, the three of them flee to wartorn Vietnam, where Pauls uncle has found work for them with his buddy, the South-Vietnamese gangster Leong (Chung Lin).

Things can't get any worse right? Yes they can. Sweet merciful heavens, they can.

Bullet in the Head is by far Woo's most personal film. Equally inspired by his own dirt poor upbringing in a Hong Kong ghetto, the tragedy of June 4th in Beijing, as well as the angst permeating Hong Kong society at the time (it was made at the same time as the 1997 turnover to China had all but been made official) it is an emotionally draining experience. If the standard epic firefights don't get you, the tragedy of the story will.

Simon Yam also co-stars as Luke, a badass CIA agent who had a Small Role, Big Impact to the three main protagonists.

Not to be confused with Bullet to the Head.