Spoilers for all previous Uncharted games will be left unmarked. You Have Been Warned! 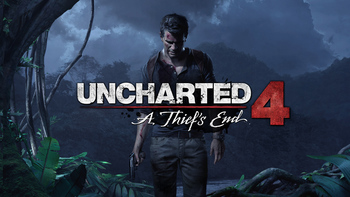 "I am a Man of Fortune, and I must seek my Fortune."
—Henry Avery, 1694 (opening quote)
Advertisement:

Uncharted 4: A Thief's End is the fourth game in Naughty Dog's Uncharted series, and the final entry to star Nathan Drake. It was originally released on May 10, 2016 for the PlayStation 4.

A remastered port for PlayStation 5 and a brand new port for Microsoft Windows has been announced for early 2022.

Years after his last great adventure, Nathan Drake has settled down with Elena into a stable, albeit mundane, domestic life. Things seem relatively quiet until an unexpected reappearance of a familiar face coaxes him into one last job to finally finish a treasure hunt he had left in his past: the quest for the long-lost treasure of legendary pirate Henry Avery.