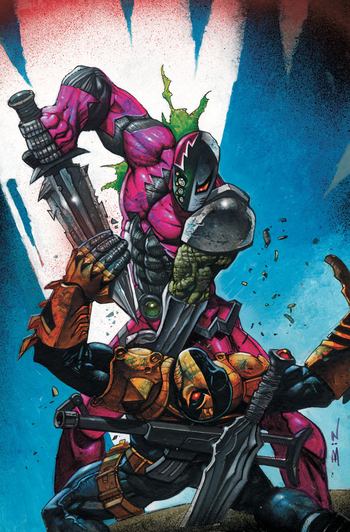 Similar to Sword and Gun, where the character shoots you with a gun in-between slashing at you with a sword, this is about characters who punctuate attacks using a weapon (not necessarily a sword) with unarmed punches and kicks. For the purpose of sorting out more fantastic examples, anything that a Bare-Fisted Monk can do counts as "unarmed attack".

This trope has a firm basis in reality: while fictional warriors tend to perfect the use of a single weapon, Real Life swordsmen and fencers would rarely limit themselves to using the sword when kicks, punches, shoves and grapplings did the job. Getting so distracted with the weapons that you forget about your other options is a grievous mistake. See European Swordsmanship for more info.

With that in mind, there is a variation of this trope that involves throwing punches and kicks in a fight with weapons in situations where using the weapon is a perfectly viable option, and thus there really is no particular reason to punch or kick (for example, a character throwing a spinning kick to the opponent's head when they could simply cut it with the sword). Needless to say, doing this would be very counterproductive in Real Life, as the whole point of using weapons is that they have numerous advantages over fighting hand to hand.

Subtrope of Choice of Two Weapons. It's often a sign that you're fighting a Combat Pragmatist, willing to use any chance they get in a fight. For characters who switch between armed and unarmed combat (but don't use both in combination), see Multi-Melee Master. Compare also the Gun Counterpart — Gun Fu (sort of). Contrast Never Bring a Knife to a Fist Fight.