Due to its nature as a sequel, spoilers for Uncharted: Drake's Fortune will be left unmarked. You Have Been Warned! 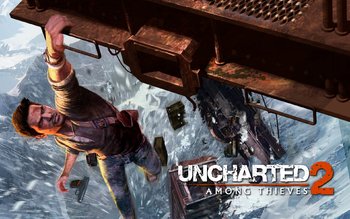 "I did not tell half of what I saw, for I knew I would not be believed..."
—Marco Polo on his deathbed, 1324 (opening quote)
Advertisement:

Uncharted 2: Among Thieves is the second game in Naughty Dog's Uncharted series. It was originally released on October 13, 2009 for the PlayStation 3.

Nathan Drake is visited by an old pair of former associates, the smooth Harry Flynn, and Flynn girlfriend Chloe Frazer, who recruit him to help them steal an artifact originating from the lost voyage of Marco Polo, which contains a clue to the whereabouts of a legendary treasure, known as the Chintamani Stone, in the fabled city of Shambhala.

Unfortunately, the Stone is also sought by Zoran Lazarević, an infamous war criminal and leader of an mercenary company. Along the way, Drake's friend and mentor, Sully, and his old flame Elena also finds themselves embroiled in the hunt for the Stone.