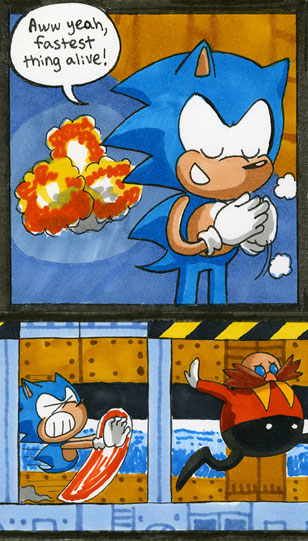 By Veronica Vera of NotEnoughRings.com

"The one weakness of any protagonist or hero-like character is a cutscene."
— KaiserNeko, Team Four Star's Let's Play of Halo: Reach
Advertisement:

The Protagonist is amazing. They can defeat hordes of monsters, perform feats of superhuman strength, solve complex puzzles no one else can, answer the most baffling riddles, and is always Just in Time for the action... that is, as long as they are being controlled by the player.

Once a cutscene starts, or the player otherwise loses even the tiniest bit of control over their character, however, things tend to go south quick.

During a cutscene, the hero is far more prone to do some rather boneheaded things such as:

Often, such things can only be resolved once the player takes command again. It's as if the main character would be Too Dumb to Live without the player's wise and guiding hand. This can be particularly jarring when the character has been in the conflict for a while and is doing an awful job, but immediately improves once the opening scene is done and the interface pops up.

The best way to gauge how bad the effect of this trope is in a given game is to ponder the question: What would have happened if the player had control throughout the entire game? Because of this, many a player has likely fantasized about how they'd have handily won that Final Boss Preview if they'd been in charge during the encounter.

The rough justification for this comes from a conflict in the nature of gameplay and storytelling. Games generally demand the player to overcome obstacles and enemies to triumph or they will lose. However, effective storytelling often calls for setbacks and precarious situations the savvy player would simply avoid or subvert. Cutscenes are therefore employed so the player's character can suffer plot-enriching setbacks without requiring player failure. It should also be noted that in many cases, especially in more realistic games, what's happening isn't so much cutscene incompetence as gameplay power to the max; in gameplay you can often do things like heal from bullet wounds in seconds, and reload and try again if you die, neither of which your character can canonically do.

This is especially common in games based on an existing story: at some point, the original protagonist screwed up, and their game counterpart invariably has to do the same thing, and the player isn't likely to do that themselves (if only because they know about it). Alternatively, this can result when the protagonist's in-game counterpart was made significantly stronger so as to use more traditional game mechanics—for instance, turning an untrained Action Survivor into a gun-wielding platform-jumping One-Man Army—but then jarringly shifts back to their original level of competence in cutscenes.

Cutscene Power to the Max is the opposite of this. Subtrope of Gameplay and Story Segregation. See Stupidity Is the Only Option for the "interactive" version. The Battle Didn't Count deals with a similar dissonance, where the player does get a chance to fight the battle, but the cutscene has them lose anyway. See also Plotline Death.

So the Master is a martial arts expert and invented a psychic power to control time. He dies twice, one on purpose to his ex-apprentice Saxon. The second? Pox smacks him into a wall and turns him into paste.

So the Master is a martial arts expert and invented a psychic power to control time. He dies twice, one on purpose to his ex-apprentice Saxon. The second? Pox smacks him into a wall and turns him into paste.