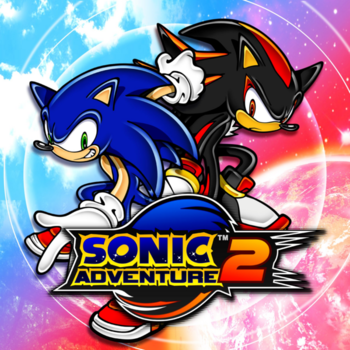 Save the world... or conquer it!
Shadow: What are you, anyway?
Sonic: What you see is what you get! Just a guy that loves adventure! I'm Sonic the Hedgehog!
Shadow: I see. But you know, I can't let you live. Your adventuring days are coming to an end!
Advertisement:

♪ Can you feeeeel life? Movin' through your mind? ♪

Sonic Adventure 2 was the long-awaited sequel to Sonic Adventure. It is historic for three reasons: It's one of the Dreamcast's final releases being released three months after the Dreamcast's official discontinuation, it came out on the franchise's 10th anniversary, and it wound up being the last Sonic game made before Sega quit making consoles and went third-party.

Per usual, Dr. Ivo "Eggman" Robotnik has hatched a new plot to conquer the world: reviving his grandfather's legacy, the now-abandoned Space Colony ARK. Professor Gerald Robotnik moved to the ARK so he could research a cure for his terminally-ill granddaughter Maria, but the project was mothballed by the corrupt military, causing Gerald to flip out and become incarcerated. Using the Chaos Emeralds to power the ARK's Wave-Motion Gun, Eggman can strong-arm the President into accepting his new world order. Joining Eggman in his scheme are two new accomplices: Rouge the Bat, a jewel thief with shady motives, and Shadow, a genetically-enhanced hedgehog who touts himself as Gerald's best achievement, and is able to teleport using Chaos Emeralds. Eggman accidentally frees him during a raid on Gerald's island prison, and Shadow makes clear his intent to make humankind pay for Maria's death.

Sonic is mistaken for Shadow and falsely arrested. Breaking out of custody in "the capital" (which looks an awful lot like Sonic Team's then-headquarters of San Francisco), Sonic resolves to find out what Shadow is up to. Joining him are his inventor friend "Tails" Prower, who transforms his now-familiar plane into a Chicken Walker; and Knuckles the Echidna, who is searching for the Master Emerald after it gets broken by Eggman... again. Unfortunately for Knuckles, Rouge also has an interest in collecting the scattered emerald pieces.

Got that? The plot is much murkier than the previous games, with allusions to Gerald's insanity (the schematics on what turns out to be his old prison cell) and unlawful execution by the military, while still retaining the cheese the series is known for. For example, Sonic being mistaken for a black hedgehog with red stripes —and despite Sonic having already saved the world repeatedly.

This is the first game in the series (barring Mascot Racers and Party Games) where you get to play as the villains, and by extension, the first where you play as Dr. Eggman. This game also introduced Shadow, Rouge, and the Exposition Fairy Omochao, each of whom would become mainstays. The structure has also been altered from Sonic Adventure: instead of selecting a single character and guiding them through a Hub Level, the Action Stages are all sequential, with the player selecting "Team Hero" or "Team Dark" at the start. Sonic/Shadow are put into the usual platforming stages, now built around rail-grinding. (It would feature just as heavily in Sonic Heroes, though less-so in Sonic '06.) Tails/Eggman pilot mechs and shoot their way through corridor levels, similar to E-102's levels in SA1. Just like last time, Knuckles/Rouge glide around open-ended stages and dig up emerald pieces and other treasures. Beat both perspectives and you unlock the "Last Story", which places both teams in an Enemy Mine scenario to save the Earth.

The Chao races from SA1 are expanded upon, with players able to raise "Hero" or "Dark" Chao depending on which character interacts with them. The game was updated for the Nintendo GameCube several months after the Dreamcast version as Sonic Adventure 2: Battle, which added yet-more Chao stuff and completely overhauled the 2-player mode, which is probably where the "Battle" subtitle comes in. The GameCube port was the first Sonic game ever released on a Nintendo home console.

Following the success of its predecessor, an HD version of this game was released for Xbox 360 and PlayStation 3 (through Xbox LIVE Arcade and Play Station Network respectively) on October 2nd, 2012 for $10; the additional two-player modes of Sonic Adventure 2: Battle are Downloadable Content for $3. The game was also released on PC via Steam on November 19th, 2012, marking its official PC debut.

Talk about low-budget flights, no food or movies, I'm outta here! I like troping better!